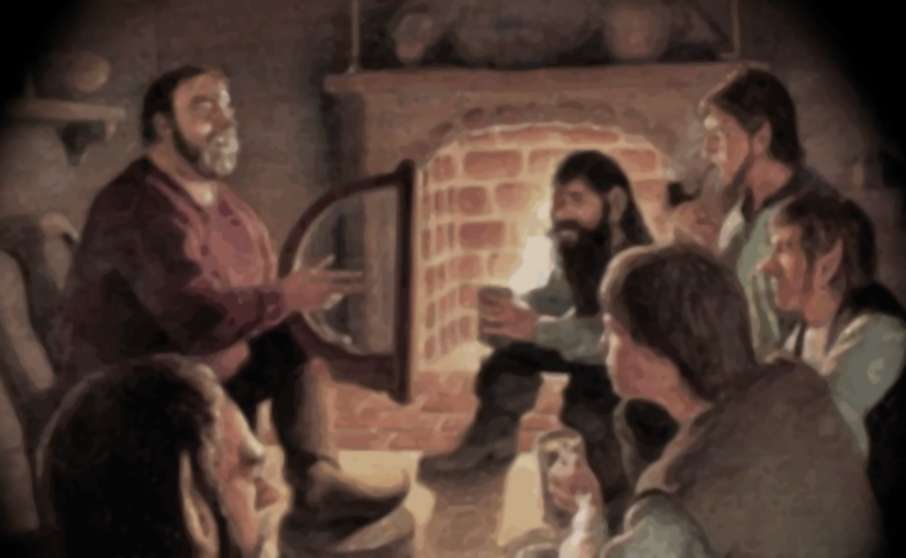 "The song I sing
will tell the tale
of a cold and wintery day.

When evil fled
and brave men bled
the Dark One came to stay.

Of castle walls
and torchlit halls
and a price men had to pay.

Till men of old
for blood and gold
had rescued Skara Brae!"

The Legend of Skara Brae


Long ago, when magic still prevailed, the evil wizard Mangar the Dark threatened a small but harmonious country town called Skara Brae. Evil creatures oozed into Skara Brae and joined his shadow domain. Mangar froze the surrounding lands with a spell of Eternal Winter, totally isolating Skara Brae from any possible help. Then, one night the town militiamen all disappeared.

The future of Skara Brae hung in the balance. And who was left to resist? Only a handful of unproven young Warriors, junior Magic Users, a couple of Bards barely old enough to drink, and some out of work Rogues.

You are there. You are the leader of this ragtag group of freedom fighters. Luckily you have a Bard with you to sing your glories, if you survive. For this is the stuff of legends.
And so the story begins...
Src: The Legend of Skara Brae

Mangar casts the spell of eternal winter, slays all the known heroes, cuts Skara Brae off from the world. A group of nobodies decides no one else is going to put it to right.

After many setbacks, they follow a tip from a bartender (or the manual), leading them to a particular bar on Rakhir Street. After the secret handshake of ordering wine gives them access to the Wine Cellars, they find (surprise!) sewers beneath, stretching down into the earth. Many scrawled hints are found, but chief among them: the name of the Mad God. Tarjan.

Having encountered the Priests of the Mad God's demands at the Gran Plaz before, the heroes try out this new knowledge, and are granted access to the catacombs, teeming with vicious undead. Deep in the bowels of this unholy place, they strike down a horrible spectre, and obtain the lost stone Eye of the Mad God himself. Supposedly, this will be of use in Harkyn's castle. Portents of "once lost the eye" foreshadow what is to come.

And so on to the castle Harkyn, striking down the dragon statue at the gate, go our heroes. Past 4x99 berserkers and other foes, they finally reach the statue of the Mad God himself. The eye they found earlier completes the statue. It comes to life and attacks! But is no match. The Mad God has been killed. ... for now... This triggers unexplained magics which whisk our heroes across the town.

They find themselves outside Kylearan's Tower, in which they find a maze of tricks and magical obstacles. Overcoming all of these, they find Kylearan is not their foe, but an ally. He wishes them well, and grants them the key to the evil wizard Mangar's tower.

Taking a strange route through the sewers, the heroes manage to emerge from behind Mangar's locked gates, climb up his tower against many mortal foes, and eventually slay him and his many undead and demonic servants. The spell of winter is broken. The heroes have won the day.

Acknowledgements
by Michael Cranford from the BT manual

The great illustrator David Lowery, for fantastic monster pictures, city buildings and dungeon walls;
My buddy Lawrence Holland, for such great music;
The devious Brian Fargo, for the treacherous design of Harkyn's Castle and Mangar's worst two levels;
Bill Heineman, for data compression routines that allowed me to pack so much graphics and animation;
and the following play-testers who helped this program be its very best: Caren Edelstein, Jay Patel, Philip Ybarra, Ayman Adham, Carl Ybarra, Mike Easting.